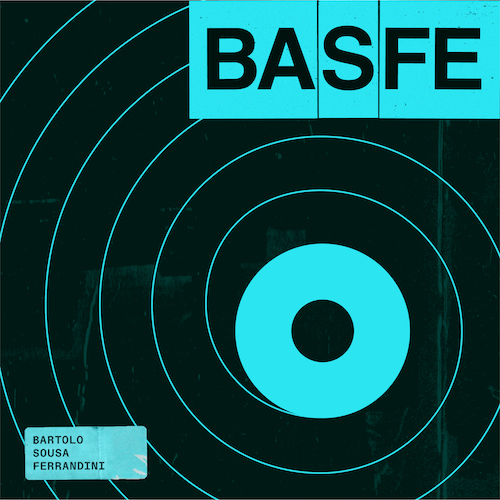 The circumstances that led to the creation of BASFE were as spontaneous, intuitive and in-the-moment as the music itself. Bartolo (guitar and modular synth) and Gabriel Ferrandini (drums) were in a recording session for another project. Once their session was done, the studio unexpectedly became available for the next several days. It happened that their friend Pedro Sousa (tenor sax) was in town and ready to play. The gear was already set up, the ‘record’ button was pushed, and BASFE was born!

Bartolo is a Lisbon-based guitarist, composer, producer and sound artist who has worked with artists including Miguel Rio Branco, Damo Suzuki, M. Takara, Paal Nilssen-Love, Arnaldo Antunes and Caetano Veloso. Pedro Sousa is an established and in-demand saxophonist based in Portugal who has collaborated with Thurston Moore, Evan Parker, Phil Niblock, Sei Miguel, Rafael Toral and many others. Gabriel Ferrandini is a drummer well versed in jazz, free improvisation and rock music. He is a member of RED Trio, amongst several other projects, has worked as a solo artist and with musicians including Alexander Von Schlippenbach, Axel Dörner, Evan Parker and Nate Wooley.

Recorded by Quim Monte at Namouche studios, Lisbon, Portugal, 2016.
Produced by Bartolo.
Mixed and mastered by Gustavo Dreher and Bartolo at Estúdio Dreher and Estúdio Monumental.